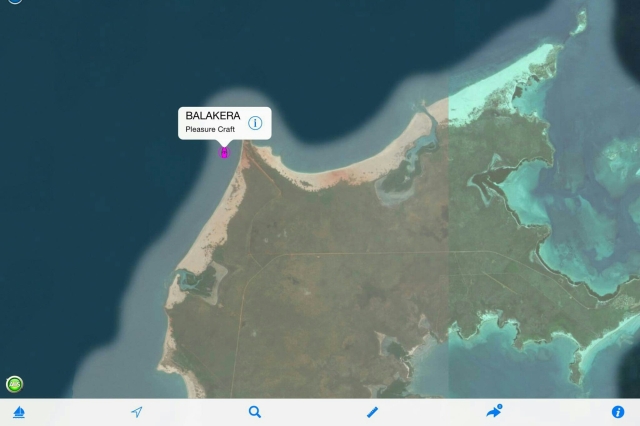 Quite rolly in the Western anchorage at Cape Leveque,  it is a surf beach as we proved when going ashore getting dunked going in and coming back out. The caravan park shop/restaurant didnt have a lot so we bought ice cream for breakfast.

The brochures they had said the seaplane trip to Horizontal Falls from Broome cost $600 per person so we did quite well shooting the rapids for $50.

The tide is running at over 2 kts from the South here at Leveque and does not turn till midday so we will wait a while before heading South. The forecast 15 kt Easterly sprang up at 10am so we up anchored even though we were pushing into 1.5 kts of tide we were able to progress South at 5 kts.

Arrived at Beagle Bay at 4.30pm anchoring near Cliff Point. Prof jumped over the side for a dip in the briny but I had seen too many grinning large fish to join him. Rissoles on bbq accompanied by the last of our canned beans and onions. Need to do some victualling in Broome.  Indian Ocean sunset enhanced by rain squalls and smoke.