Today we crossed the stretch of water to the North of Derby called King Sound to get us across to Cape Karrakatta and onto Cape Leveque where hopefully there is phone and internet. It is a 46 nm leg and we expect some significant assisting current pushing us West after midday.

We had to wait till 9 am for there to be sufficient water to ‘escape’ from the basin at Crocodile Creek waterfalls then we will push a couple of hours of adverse current up till Hidden Island before slack water and a favourable tide. At 6.30 am the water had risen a metre to cover the bottom of the ladder next to the waterfall you can see in the photo below.

The phrase of the trip so far is attributed to Jim because of his disdain for technology salesmen over promising.; “giving birth to a salesman” because they are full of….. Jim used to be a poker machine engineer. Prof has coined some variants such as “the salesman has come knocking” and “sales meeting time” to advise his need to adjourn to the small room. Passed the cruise Lady M at Cockatoo Island. We had last seen her when we departed King George River.

Arrived at Cape Leveque at 4.30pm and prof is cooking sausages, italian sauce, chick peas and pasta. Beautiful moon rise over the cape. Was able to phone home but the internet access was spasmodic. 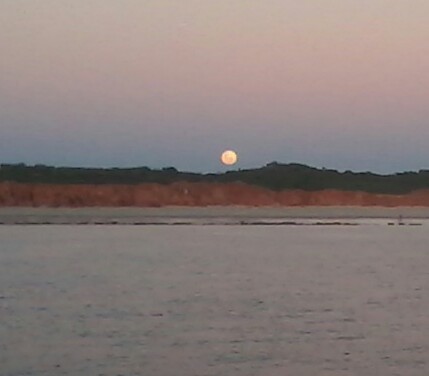