Prof got a shock during the night when he got up for a leak. A 6ft shark swimming around the back and underneath Baly. Accordingly the book we create to chronicle these blogs we think should be called “once around the shark pool”. It is the third large shark we have seen.

At 6.30am we left Murrara Island anchorage on our ninth day in the Kimberley for the zig zag run through Port Nelson. Firstly we sail west for 12 miles around Cape Then we head South for 7 nm to Careening Cove and then another 20 nm South West across Brunswick Bay  to Tenggara Bay.

Prof introduced me to some great music by the Broome based Pigram brothers playing with the White Pointers, featuring steel guitarist Lucky Oceans in the album Dirtmusic and their own album Scrapmetal. 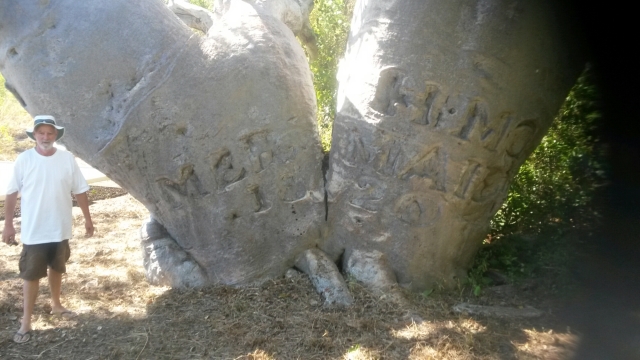 Arrived at Careening Cove at 10.30pm and went ashore to find the carved boab tree. This was carved in 1820 by Philip Parker King when he beached his vessel HMC (cutter) Mermaid. We continued on about one hour later. The passage through Port Nelson is unsurveyed and the guides report that plotters like Navionics have objects out of position. So we had Prof on the cabin top watching out for unmarked rocks. He is seen here as we emerge at the Western end near Cape Brewster and Bat Island.

Anchored at Tenggara at 4pm which is another beautiful anchorage. I am bracing for another of Prof’s currys tonight.