We had considered anchoring overnight along 80 Mile Beach but it would have taken us 40 miles off our direct route. So we did the 200 nm leg as an overnighter. Left Lagrange at 3am to take advantage of the early morning breeze.

There was bit more wind than forecast which made it an uncomfortable night. Because there is a large shoal area to the NE of Hedland we were 30 nm offshore and consequently we had to push against 25 kts of SE wind  for 6 hours to get into port. We were buggered when arrived at 1pm. Very busy port, we counted 30 ships anchored waiting to enter. 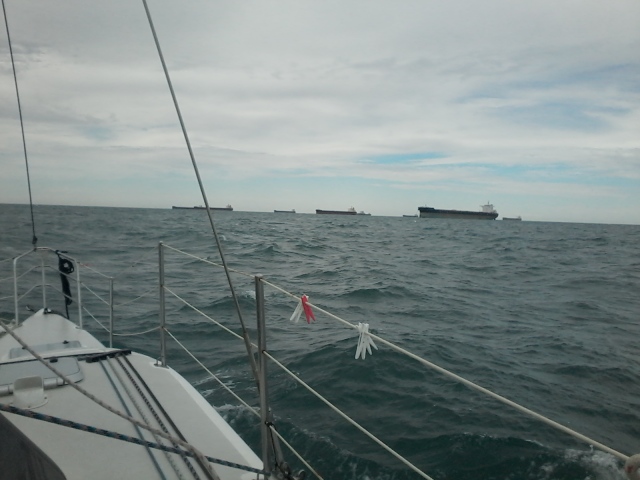 Gave up paying big city/mining city prices at $10.50 for a beer at the Esplanade Hotel (wanted $45 for a steak, $9 extra for chips, $9 for salad) and found this nice little cafe called the Dome with excellent reasonably priced meals. It had a real neat global dome in the ceiling.

We had to drag the dinghy what must have been at least 500 metres down the beach when we got back from dinner because the tide had gone out so far. Hedland has a 6 metre range compared to 1.5 metre range in Brisbane. The harbour lights including the omnipresent tugboat can make this busy industrial port look attractive at night. A similar amount of lights appear out to sea with all the anchored ships. It looks like another town out there.