Posted on September 2, 2015 by jennybaan

Departed Cape Arid at 6 30 am, happy with how the fisherman anchor held us on the weedy bottom at Arid Bay with its first deployment. It was interesting to see the bay in daylight as we had entered using gps plotter and radar after dark.

We had our last view of Western Australia, as we passed Cape Pasley, the Eyre Peninsula is 600nm east. Had some shearwaters fly quite close behind Baly.

I have never worn so many clothes to keep warm, I feel like the michelin man. Two layers of thermal longjohns and vests, singlet, flannel shirt, trousers, woolen jumper and beanie dragged down over my ears. At night we add oilskin jacket and trousers plus scarf and gloves. Brrrrr!

6am daybreak on the second morning out from Cape Arid (Friday) has us 480nm from Coffin Bay. 190nm from Esperance and 120 nm from Cape Arid. Not very good progress but what can you expect when pushing into a ENE wind with a short steep sea. We were blessed with a full moon though. For the second successive day we are punching into 25 kt headwinds and a nasty sea. Where are the Northerlies that were promised. Jim saw the green flash at sunset, a rare phenomenon caused by refraction as the sun moves below the horizon.  I missed it as I was below offwatch.

6am daybreak on the third day (Saturday) has us 375nm from Port Lincoln and 325nm from Esperance. Approaching halfway and still punching into Easterlies. After 2pm we entered South Australian waters, beyond halfway and  we instituted a 90 minute time change giving us a short day. The lonely sea and sky. No land seen for over 72 hours, closest land is Eucla, over 200 nm to the North. 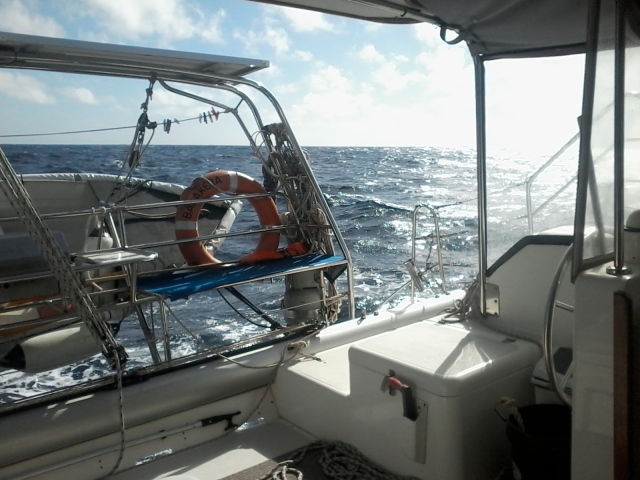 6am daybreak position on the fourth day (Sunday) is 275 nm from Port Lincoln.so it is looking like a Tuesday arrival. Drama just before sunrise was a broken headsail sheet. Grateful for a bit of moon to get it sorted. 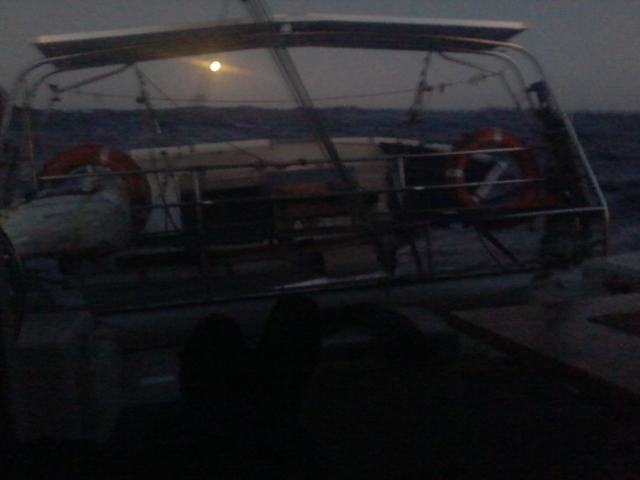 At 6am on the fifth day (Monday) we are 170 nm from Port Lincoln which is somewhat academic as the stupid NE winds have pushed us so far South that Port Lincoln is to windward requiring tacking which doubles the distance. Ports on Kangaroo Island look much more attractive.  We broke another autopilot gearbox at 9pm, the last was replaced under warranty in Fremantle. Jim combined an old spare drive of his with ok gearbox together with a new motor also replaced in Freo and we were sorted within an hour. It seems these devices are good for 7 years of normal use on Moreton Bay, half a lap of Australia in easy conditions and a quarter of a lap in arduous conditions across the bottom.

Spoke to the car carrier Fremantle Highway, enroute from Melbourne to Fremantle at 7.30am to get a weather forecast to supplement our satcom Ocens Spotcast weather feed.

At dawn on the sixth day (tuesday) we were 50nm from the Western end of Kangaroo Island. Looking good finally with a Northerly but alas the wind has swung back around to the NE. The old autopilot from Jim’s boat lasted 24 hours before its gearbox starting making grinding noises. So at midnight using a torch for light he removed the 3 stripped gears from the nine total in the new Fremantle gearbox and replaced these with three unstripped gears from my old autopilot drive gearbox that we replaced last year when some but not all gears stripped coming home from Lady Musgrave Island. There seems little this man can’t resolve at sea with his engineering skills. 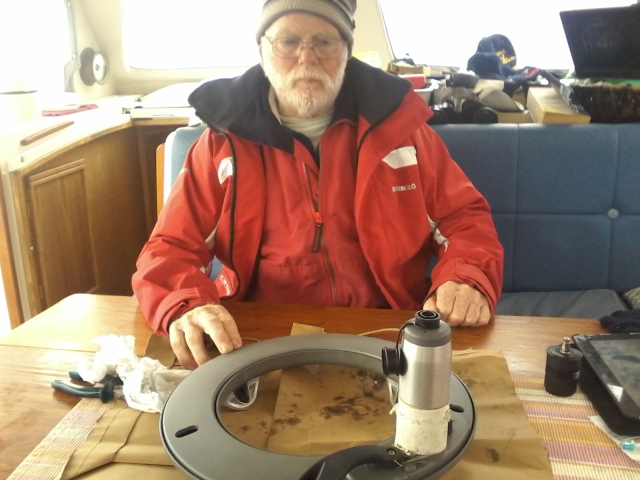 We arrived at West Bay at the Western end of Kangaroo Island at 4.30pm in the rain. GAB crossing completed thank God. Had couple of glasses of red to celebrate,  basic meal of noodles and stew. In bed at 7pm and slept for 13 hours.

When you have a rigorous ocean passage the best thing you can say about it is the sense of accomplishment when it is over. This has not been the worst passage I’ve made, that would be pitch poled crossing Bass Strait bringing a  boat up for the Sydney Hobart race start. This GAB passage has been a long and tedious exercise though, 7 days of adverse winds, 4 days of 25 to 35 kts headwinds. This is after all the prior planning of NOT being here when Easterlies prevail (October and November) and delaying departure for a week to get a better forecast. 7 days is long and slow for a GAB passage, usually 5 days with Westerlies. Last year Jim did Albany to Port Lincoln in 5 days, 180 nm longer than our passage. The constant concern about the punishment the boat is receiving wears you down. Not so much the hull because she is substantially built but more the sails and the rig. But the sea can do as she likes, she is the boss. Really pleased I had Jim with me for this section.