Had a quick shower ashore at Wirrina Cove before departing at 6.45am. An hour and a half later we were at Cape Jervis to turn East through Backstairs Passage. We were looking for the Kangaroo Island ferry as Jim and Margaret are coming back from their stay on the island today. There were plenty of windmills to tilt at along the coast near the cape.

Wildlife lesson today was moths, hundreds of them came onboard when we were 10nm offshore. It was as though someone onboard may have opened their wallet? 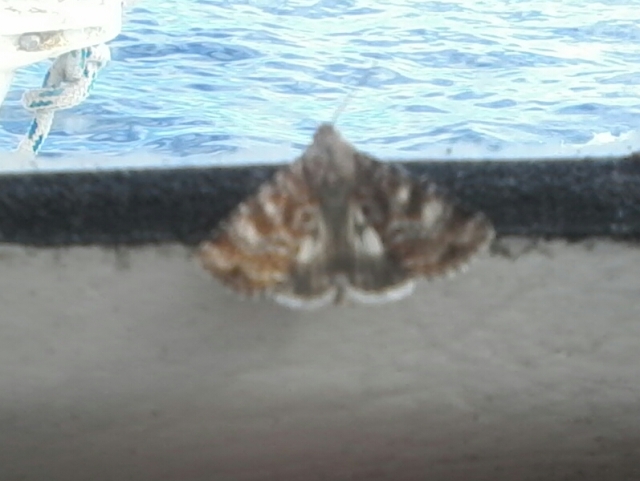 Then there were also the flies, what are they doing out here 20 miles from land, there is no cow shit out here. More welcome were the dolphins, another seventeen of them playing around Baly’s bow.

At 6pm going into the overnighter we were 40nm  SE of Cape Willoughby at the Eastern end of Kangaroo Island and 70nm NW of Robe. Haven’t snapped a sunset for a while.

The dolphins remain with us after sunset and you can see their phosphorescence trails as they continue to cavort around the boat. Dinner tonight was one of my favourite traditional dishes from Holland called “stompot”. It consists of mashed potato, sauerkraut,  bacon, wurst and a thin dutch gravy. A good dollop of mustard sets it off. Delicious!

This entry was posted in Uncategorized. Bookmark the permalink.