Was lying in my bunk half asleep waiting for some daylight when all of this noise came from the cockpit, engines being dropped, then started. I heard prof say, “maybe that will wake you up”, he was ready to go. So we left Port McDonnell at 6am with the depth alarm blaring, the port is very shallow.

Not as much wildlife this morning, though there was the resident dolphin who watched us pick up the mooring yesterday and escorted us out this morning. Prof said he saw a seal surfing the waves. I’m halfway through a Jo Nesbo book prof gave me yesterday. At midday we passed Cape Duquesne,  another prominent headland with wind turbines.

Adjusted the clocks for the last time as we are now in Victorian waters and are on Australian Eastern Standard Time. Had some dolphins join us after lunch to restore our faith that the Victorian ones are friendly and fun loving too.

Portland’s aluminium smelter has its own wind turbine farm to supply the large amounts of electricity these plants require.

Arrived at Portland’s new marina at 4pm, a great facility 5 minutes out of the centre of town and only $20 a night.  One of the guys that helped us tie up had a black dog called Angus that reminded me of JD.

The welcome became even better when Jim and Margaret arrived for sundowners on Baly. They had been tracking us on AIS from their car. We later joined them for dinner at an Indian restaurant. 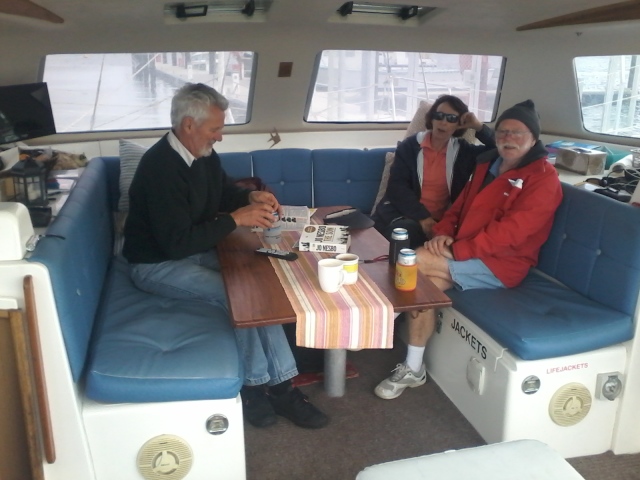