We left Lady’s Island Marina at 8.15am to cross the river to Beaufort proper and explore the town of 10,000 population. We are glad we did. It was a quaint, funky place with beautiful Southern architecture and is known as the artists capital of South Carolina with numerous galleries.

We met George Smith at the Santa Elena Foundation that is promoting the recent archeological finding of a a Spanish town that predates the Mayflower’s arrival at Plymouth and necessitates the rewriting of some 100 years of American history. The Santa Elena town was set up in 1566, not long after Columbus found Haiti and Cuba in 1492. 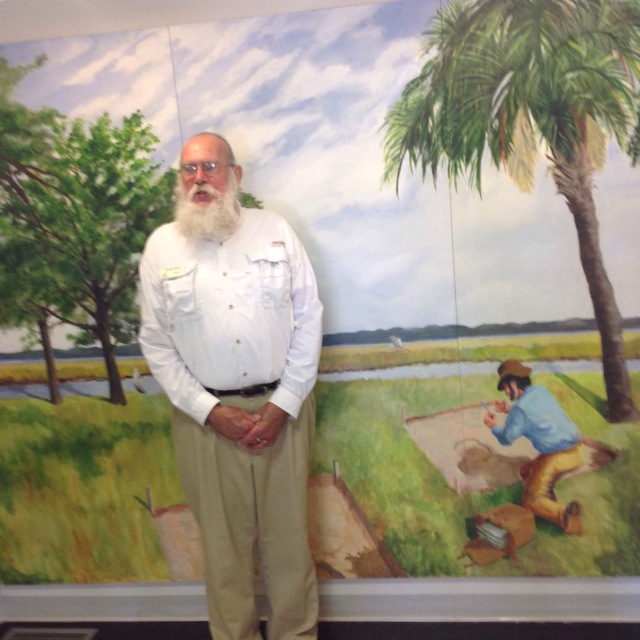 We are quite close to Parris Island US Marine base that turns out 20,000 graduate marines each year. The area was also the location for the filming of Forrest Gump.

We left Beaufort at 10.15am thoroughly impressed and met a couple at the free day dock heading back to Maine who said Beaufort was their favorite stop in the entire East Coast.   We also passed by Graeme and Rose on the sailing vessel Raven, who hail from Newport Rhode Island, seeing them for the fourth day running. We will probably join them at the marina tomorrow.

St John’s Yacht Harbour, where we stopped to bunker some fuel, had the best bathrooms I have seen at a marina. We are now anchored at Elliott’s Cut only 2 miles from downtown Charleston. We are tucked between a marshy island and a row of upmarket waterfront homes. The waterways guide recommends this anchorage as it is protected from every direction.

This entry was posted in Florida to Virginia. Bookmark the permalink.