It was overcast when we left Drummond Island Yacht Haven and quite soon we had fog and then rain for most of the day. Visibility was not as bad as when we left Penetanguishene but we still used radar,  GPS plotters and AIS. Thankful for the American usage of substatial navigation marks like De Tour Shoal Light pictured above at the Southern end of De Tour Passage.

Our route today took us from Drummond at the right of the chart above, across Sturgeon Bay, South through De Tour Passage, West across the top end of Lake Huron and into Cedarville located in the Les Cheneaux Islands. Lake Michigan is about 45 miles further West. Had a great one hour video conference with Ela and Lucas in Victoria BC. 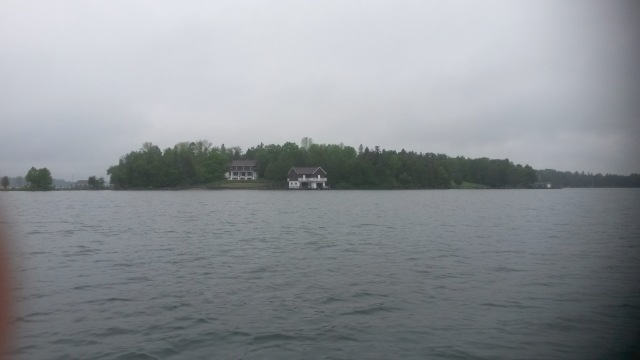 The beauty of this region hasn’t diminished just because we are now in a different country. The quality of the waterfront houses and boatsheds on the way into Cedarville were reminders that waterborne lifestyles are also popular here in Northern Michigan. The docks here were covered in mayflys/fish flys which apparently only live for a day as they can’t eat but they appear in plague proportions for about two weeks a year.

This entry was posted in Michigan. Bookmark the permalink.