This is Balakera’s about me page, thank you for visiting us. Get to know her with some of her gallery photos.

Balakera 5, the Seawind catamaran remains our primary vessel, however in 2016 we leased another vessel named Grace Full which we will call Balakera 6, in the US to do the American Great Loop.

This site chronicles our exploits in Balakera 5 as she circumnavigated Australia and Balakera 6 on the American Great Loop.

Balakera 5 is based at Raby Bay in Brisbane, she is Seawind 1000 catamaran owned by Derrick and Jenny Baan.

She has been a versatile vessel for us, sometime corporate charter boat, holiday shack and transport on previous tours like a Dunk Island cruise for 2 months. She has participated in all Seawind Moreton Bay Regattas, the Seawind Whitsunday Regatta and the Dent to Dunk Rally. Balakera has cruised to Lady Musgrave Island twice. She is our all round sanity machine.

The name is derived from the name of Jenny’s grandfather, Pop Keegan’s farm, at Seaham, north of Newcastle. It means plentiful food and water in his native Irish dialect. Interestingly it also means ‘of the child’ in Sanskrit.There has also been a successful racehorse of the same name.

A Seawind 1000 of 10 metres length, she is number 72 of over 300 of these popular craft that have now been built. This Balakera is the fifth to carry the name, the original was a Swanson 28, in which we spent a year cruising North to Townsville as our honeymoon. 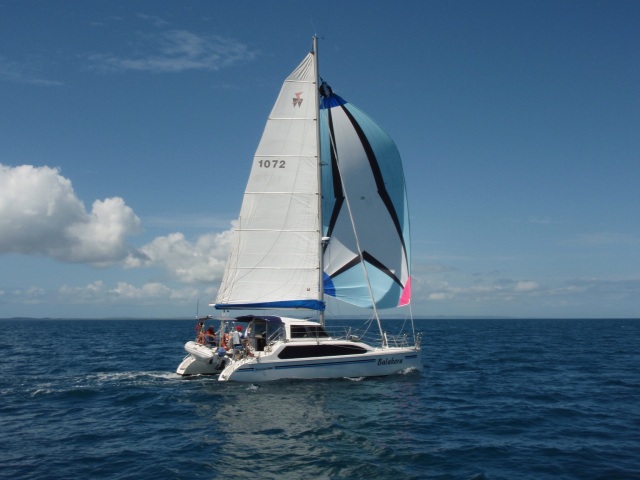